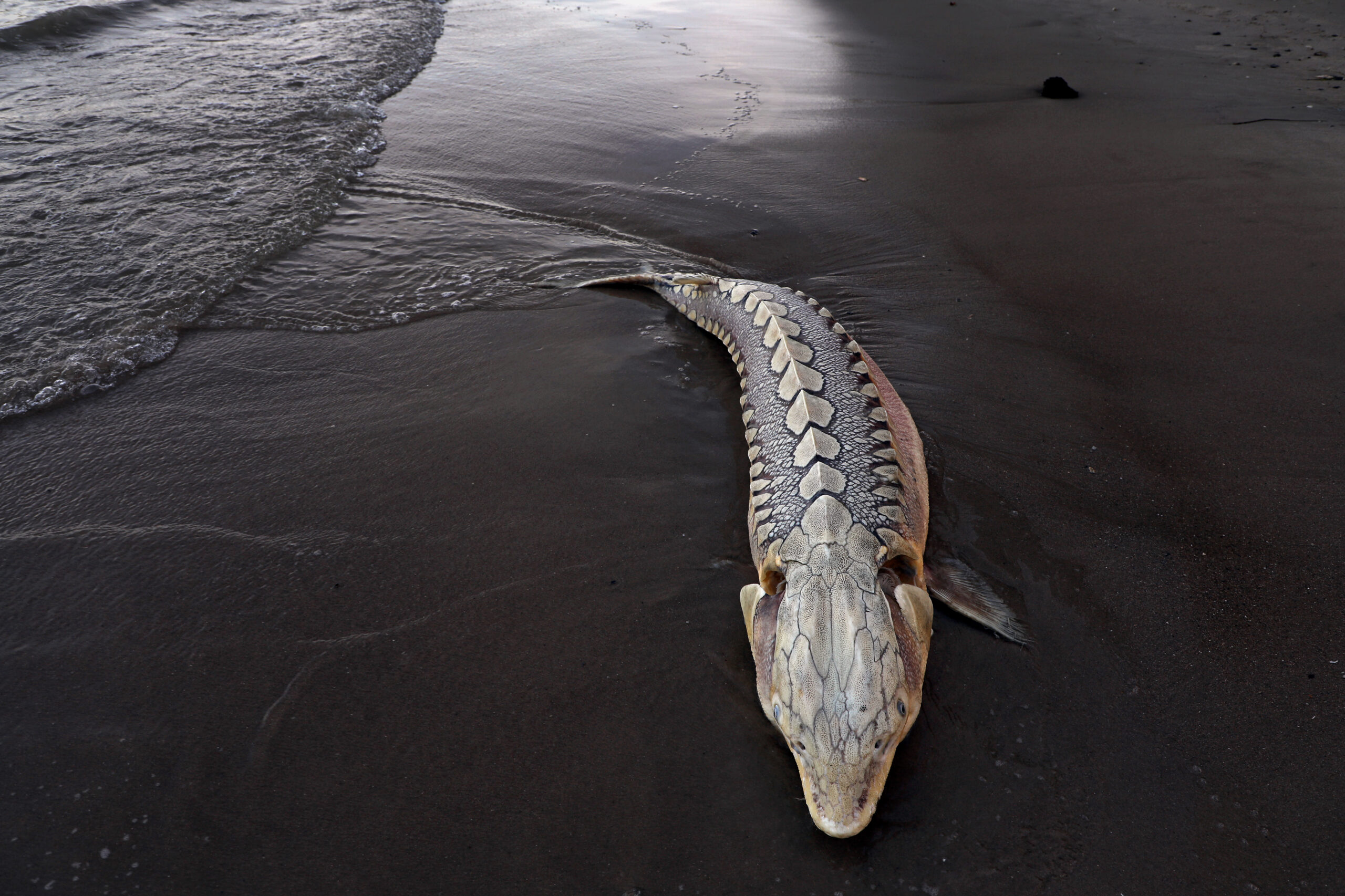 To save a prehistoric fish
from the brink of extinction.

Call on Our Government Agencies to Act Now to Protect Our Sturgeon From Extinction.

With Only 250 Spawning Adults Left We Are Running Out of Time!

The Delaware River is home to a genetically unique population of Atlantic Sturgeon found nowhere else in the world. The Atlantic sturgeon, listed as a federally protected endangered species since 2012, has a storied history in our Delaware River. Early American settlers said there were so many they could cross the River walking on their backs. But today, there are less than 250 spawning adults left of the River’s genetically unique line. Resource managers and regulatory agencies have neglected their duties to protect the health, habitat, and safety of the sturgeon.  Soon it will be too late. The agencies have lacked in their duties by:

The sturgeon need your help TODAY before it is too late!

Philadelphia, PA – Activists, indigenous leaders, and environmental advocates from across the watershed banded together today at Philadelphia City Hall to demand better protections for the Delaware River’s genetically unique population of Atlantic Sturgeon. Over fifty demonstrators processed around City Hall and the Army Corps of Engineers offices dressed in black, holding a funeral for the soon to be extinct Delaware River Atlantic Sturgeon. Protestors carried a coffin supported by pallbearers representing various regulatory agencies, a banner adorned with the 250 remaining sturgeon hand-made by Westfield Friends School middle school students, 180,000 paper sturgeon piled high into wheelbarrows, and three oversized sturgeon representing just a fraction of the total population loss. Through this action, demonstrators spotlighted the knowing decimation of the Delaware River Atlantic Sturgeon population by government agencies, pressing these agencies to take strong action immediately to prevent the sturgeon’s demise.

“For hundreds of years the government officials of our region have allowed our genetically unique population of Atlantic Sturgeon to be ravaged. It is legally and morally wrong that our government agencies today do not use the authority they have to right this historic wrong and to take every step necessary to help our Atlantic Sturgeon to populate and to thrive. Our Delaware River Atlantic Sturgeon live nowhere else on earth but in our beautiful Delaware River.  If our agencies fail to do everything they can to protect them, they will have betrayed their oath of office, betrayed future generation’s who will be denied the beauty and joy of our River’s genetically unique sturgeon, and will have acted with an unforgivable hubris believing they were entitled to wipe out a genetically unique population of sturgeon without apology or concern, ” stated Maya van Rossum, the Delaware Riverkeeper and leader of the Delaware Riverkeeper Network.

Whether You Can Join Us or Not – Please Sign The Petition to Urge the Agencies to Act and Save The Atlantic Sturgeon of the Delaware.

The Delaware River’s Atlantic Sturgeon is in Peril

Two species of sturgeon live in the Delaware River, and both are endangered species.  The Shortnose Sturgeon’s population is stable.  But the Atlantic Sturgeon is threatened with going extinct here in the Delaware River in just a few short years.  The two biggest threats are pollution and death by ship-strikes (road-kill in the estuary).  We need everyone in our region to learn about this possible extinction, and to help turn the tide and stop the march to extinction!

Atlantic Sturgeon were listed under the Endangered Species Act in 2012

Threats and How You Can Support Advocacy

Mortality from physical contact with ships and other large infrastructure in the water is arguably the primary threat to the well-being of Atlantic Sturgeon today.  These risks tend to be the worst in areas with high ship traffic such as the Delaware, Hudson, and James Rivers.

Pollution of waterways via the introduction of excess nutrients remains as of the most impactful pressures Atlantic Sturgeon face today. Often these nutrients lead to low oxygenated or dead zones that suppress an ecologically healthy environment. Any action that reduces polluted storm runoff from entering waterways (examples listed below) can go a long way:

Atlantic Sturgeon habitat continues to be destroyed or degraded by a host of human activities including but not limited to dredging, intake of water for cooling of energy systems, and introduction of excess nutrients to the river via stormwater runoff. Rock blasting, dredging and river deepening directly threaten sturgeon habitat through physical disturbance but they may also lead to the sensitive sturgeon hard substrate bottom habitat being covered by excess siltation. Dredging has also contributed to saltwater intrusion, a phenomenon whereby saltier waters are accidentally introduced to a fresher water system and causes ecological damage, and varying influences to the quality of the river water.

The Delaware Riverkeeper Network is an environmental nonprofit organization that works throughout the entire Delaware River Watershed, including including parts of Pennsylvania, New Jersey, Delaware, and New York — and at the federal level on issues, actions, regulations, legislation, policies, programs and decisions that impact the health of our Delaware River Watershed waterways and our ability to protect and restore them for the benefit of all.